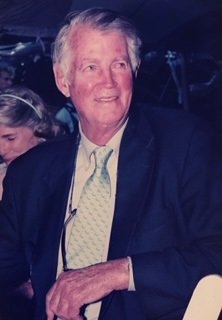 Thomas (Tom) Moore Bancroft, Jr. died peacefully at his home in Muttontown, NY, on Monday, October 7th, 2019, at the age of 89.  He was the devoted husband of his wife Barbara and a beloved father, grandfather and friend.

Son of Thomas and Edith Bancroft and brother of William, Tom was born in New York City and grew up in Old Westbury, NY.  He attended Green Vale School in Glen Head, NY until 1942 and The Slade School in Sandy Springs, MD until 1944.  He is a 1947 graduate of Middlesex School in Concord, MA and a 1951 graduate of Princeton University.  Immediately following college graduation, Tom enlisted in the Navy, serving as a Naval Intelligence Officer in the Korean War and reaching the rank of LTJG.

In 1955, Tom began his long and gratifying business career in the textile industry with Mount Vernon Mills.  He started with Turner Halsey, a sales and marketing subsidiary, and rose through the organization to serve as Chairman and CEO for seven years until the company was sold in 1982.

In 1983, Tom became Chairman of the New York Racing Association, serving in that capacity until 1990.  He had a passion for horse racing.  From 1972 until 1995, Tom and his late brother Bill successfully bred and raced thoroughbreds under the racing partnership Pen-Y-Bryn Farm.  The cornerstone of their breeding efforts was Hall of Fame thoroughbred Damascus, who was Horse of the Year in 1967 and had been owned by their mother Edith.  Under Pen-Y-Bryn’s ownership, Damascus became a leading sire.  Tom and Bill bred and raced numerous stakes winners including Highland Blade, winner of the 1983 Marlboro Cup.  This partnership provided Tom and Bill with a great deal of joy.

Tom served as lead Director of Victaulic Corporation, a producer of mechanical pipe joining solutions, for over 50 years.  He loved the company and provided steady stewardship and vision since getting involved with the business in 1964.  Tom’s involvement with the people of Victaulic provided him with deep satisfaction.

Tom was a dedicated member of his community and an active, long-standing and trusted advisor to many non-profit organizations.  He served on Glen Cove Hospital’s Advisory Council since 1999 and was a member of Green Vale School’s Board of Trustees from 1972 until 1996.  Tom served as a trustee of Middlesex School for nearly 50 years, starting in 1972, and was president of the board from 1980 until 1985.

Tom lived a long, full, and rich life.  He was a true leader and served as a trusted and sage advisor to so many.  Words used to describe him include wise, inquisitive, conversationalist, loyal, historian, gentleman, honest, unpretentious, clear in thought and deed, family focused, growth oriented, good friend and mentor.  Tom was an avid golfer and talented woodworker.  He has been a good friend to many and respected by all.  Above all else, his family was his greatest passion.  The world will be a less bright place without him.

A Funeral Service will be held at St. John's of Lattingtown on Friday October 11th, 2019 at 1pm. Arrangements entrusted to Dodge-Thomas Funeral Home of Glen Cove.

Share Your Memory of
Thomas
Upload Your Memory View All Memories
Be the first to upload a memory!